A Pride Flag Raising Ceremony at Province House kicked off Pride celebrations and showed support for members of the 2SLGBTQ+ community, family, friends and allies June 27.

Allison Smith is a Human Rights Officer at the Commission and a Co-chair of the Pride Nova Scotia Government Employee Network and spoke for the group at the event. Below is the text of her remarks and some photos from the celebration. To learn more about Pride 2019 ghere. 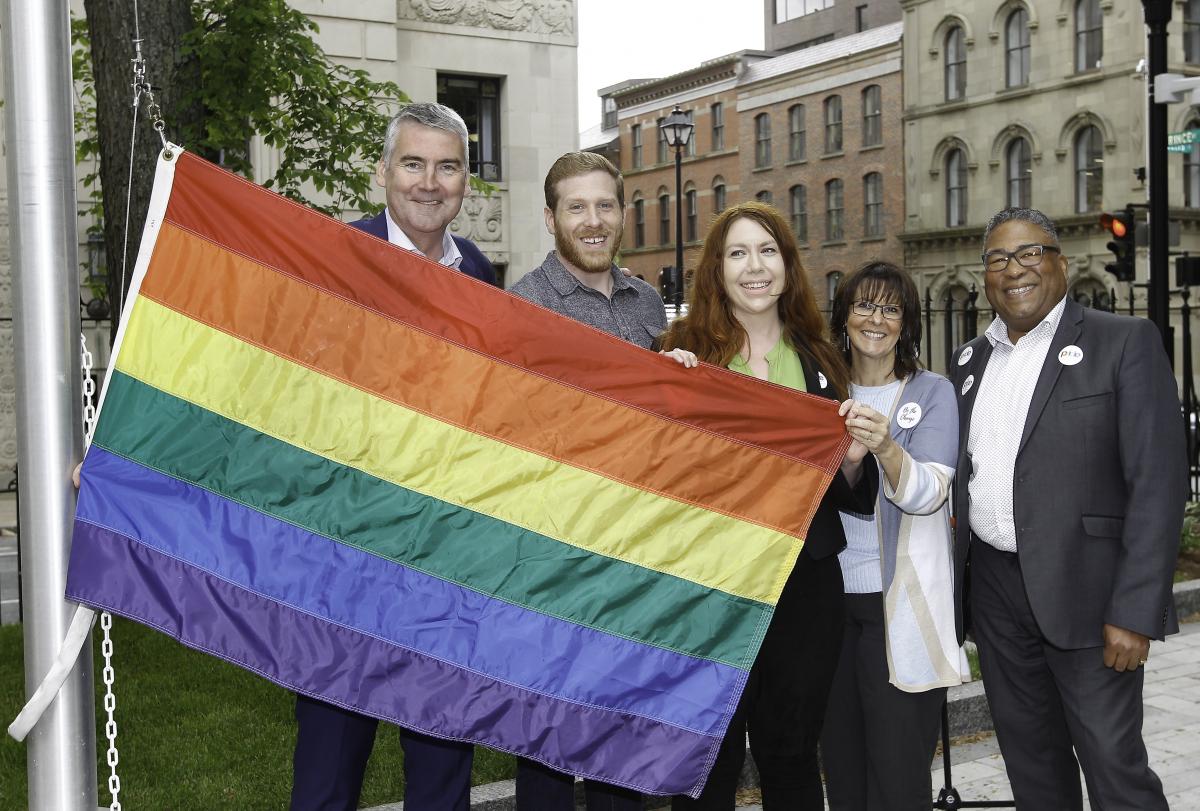 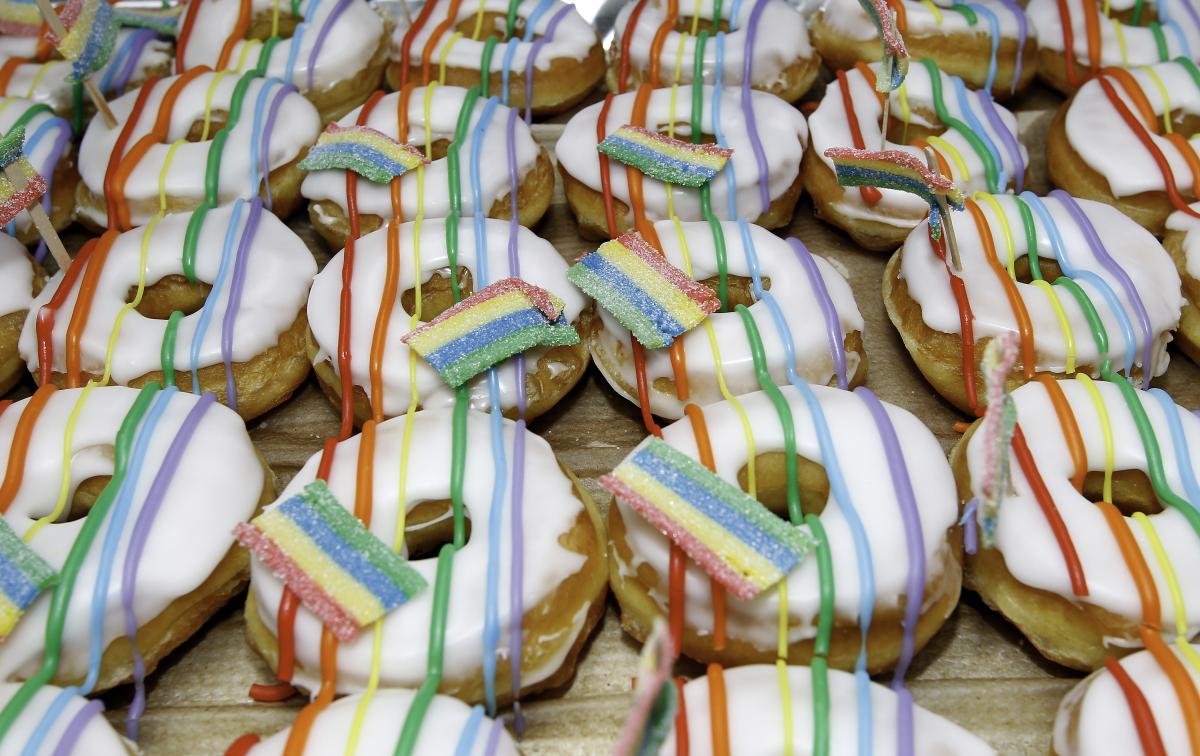 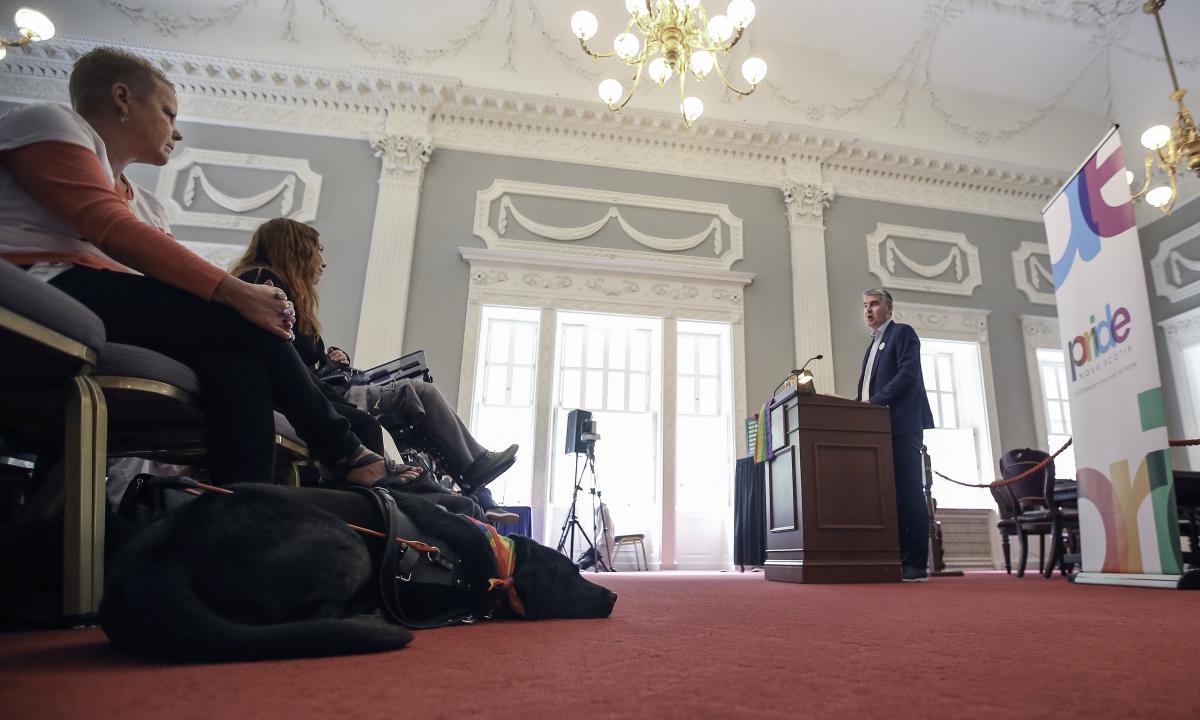 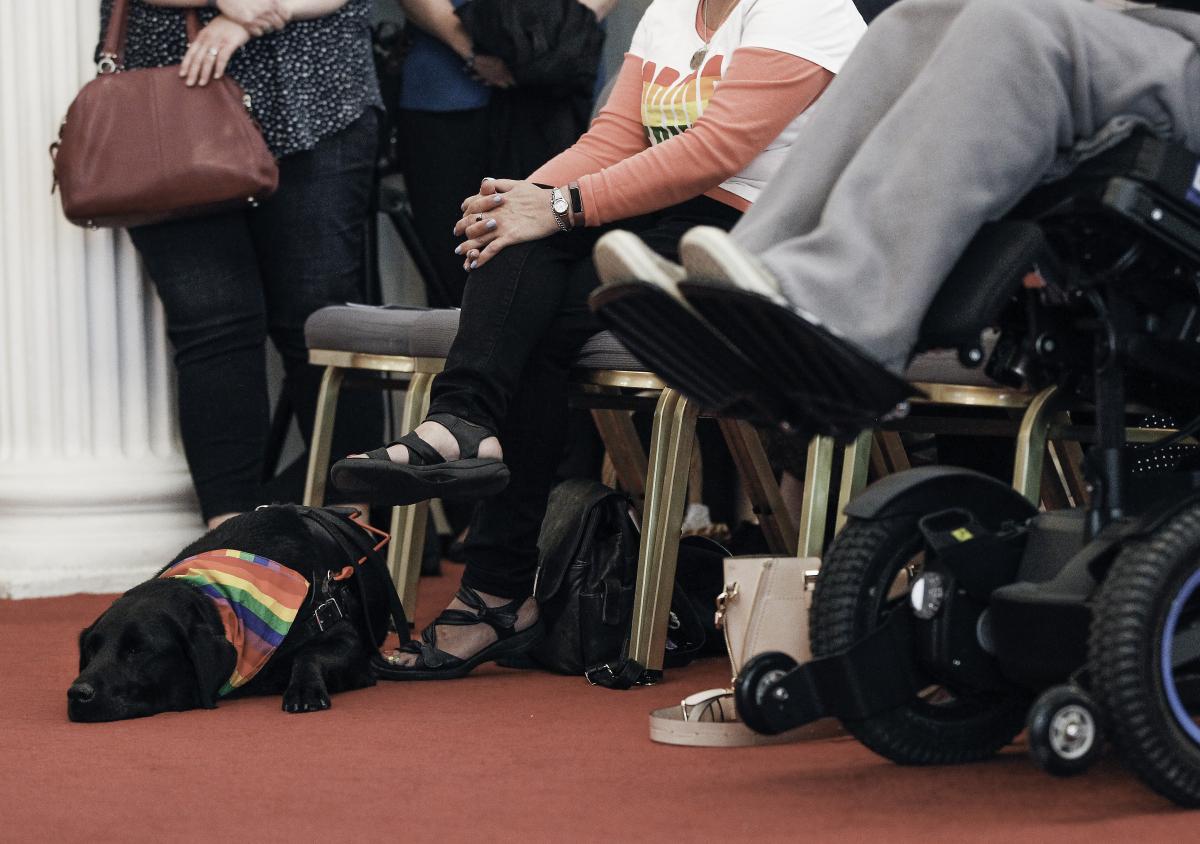 I would like to begin by acknowledging that we are in Mi’kma’ki, the ancestral and unceded territory of the Mi’kmaq People. I’m Allison Smith and I am the Co-Chair of the Pride Nova Scotia Government Employee Network. Our Network’s role is to foster supportive and inclusive workplaces for 2SLGBTQ+ employees of the Province of Nova Scotia and those who are served by our various departments.

This is my third year co-chairing the Network and offering remarks at a flag raising ceremony. It is truly a privilege and a joy to be here once again with you in the spirit of celebration and reflection. When thinking about what I wanted to say today, I spent some time reflecting on a repeated pattern in my remarks from the previous years. Each year I – and we collectively as a 2SLGBTQ+ community – frame our Pride reflections in terms of two polarities, two far-apart points on a connected horizon. During Pride season, we seem always to talk about how far we’ve come, and we also talk about how far we have yet to go. And it is only right to do so. As a community, we have learned well the art of celebrating while also holding space for grief and pain.

These two poles intrigue me, because our 2SLGBTQ+ community is one that is deeply resistant to binaries. We resist binaries; we know that gender isn’t a simple binary, but a complex spectrum, an ever-growing rainbow of beautiful and valid identities. And yet, despite this resistance to binaries, at this time of year we are marked by the historical and very real necessity of a binary of joy and grief, a binary of celebration and reflection. Because the reality is that we are still residing in an era in which discrimination against 2SLGBTQ+ people is normal and normalized, both close to home and around the world.

And so, for the time being at least, this binary is one to keep. Today, we celebrate how far we have come, but we also acknowledge how far we have yet to go to ensure that human rights and dignity are realized for all members of our rainbow community.

Our community is defined by pride, but so too do we have its dark shadow, which is shame. We have love, but we also have rejection, which is evidenced in the disproportionately high rates of 2SLGBTQ+ youth homelessness. We have pride parades with their beautiful range of colours, but we also have closets and in some parts of the world prison cells. We have love, but we also have fear – not just in far off places, but here too, and in places so simple and seemingly benign as a washroom down the hall. Canadian statistics suggest that 70% of trans individuals have faced some kind of harassment in washrooms, and that 57% have actively avoided using public washrooms due to fear of harassment. And the truth is that we still live in a world in which violence toward trans and non-binary people, and in particular trans and non-binary people of colour, seems to be reaching higher numbers each year.

When I raise these points, I certainly don’t want to rain on our rainbow today. But I suppose you can’t really have one without the other. And, to balance out the dark skies, the truth is that we really have come so far. Tomorrow marks the 50th anniversary of the Stonewall Riots. 50 years ago, at the Stonewall Inn in New York City, 2SLGBTQ+ people took a stand and fought back against violence and discrimination. Stonewall has become a symbol of the pride and resistance that has defined our community and continues. And – to bring things closer to home – in Canada, it was 50 years ago today – on June 27, 1969 – that the Criminal Law Amendment Act received Royal Assent. This decriminalized same-gender sex acts between consenting adults, thus giving momentum to a Pride movement in Canada as well.

To bring things even closer to home, Halifax had its first Pride Parade 31 years ago. 75 people marched through North End Halifax to protest homophobic violence and discrimination. Many of those who marched wore bags over their heads. Our Pride celebrations in Nova Scotia have grown so much since there, but we still honour this history and the incredible work of the activists whose bravery made Nova Scotia safer and more inclusive.

The Pride Flag Raising is an opportunity for us to reflect on the significant work that has been accomplished over the past fifty years to advance the rights and equality of 2SLGBTQ+ people. There are many victories to celebrate. When looking back over just the past year, I am delighted to reflect on amendments passed to the Nova Scotia Vital Statistics Act and regulations which broaden the options for gender markers on birth certificates. In recognition of the full spectrum of gender, as of July 9th of this year, Nova Scotians will be able to access not just a M or F gender marker on their birth certificates, but will also have the option of a gender neutral ‘X,’ or the option of not displaying their gender at all. Additionally, Nova Scotians of the age of majority who wish to update their gender marker will no longer have to provide a letter of support from a medical professional but will be able to self-declare. These are exciting, forward-thinking developments that help ensure the dignity, safety, and human rights of all Nova Scotians.

Raising the pride and trans pride flag is an important and visible symbol of the commitment of the Nova Scotia public service to ensuring safe, inclusive spaces in which we can all be treated with dignity and feel proud of all aspects of who we are. This year, in addition to Halifax, the Nova Scotia government is once again displaying Pride flags inside 7 provincial buildings across the province. This year, flags will be displayed in Yarmouth, Bridgewater, Kentville, Truro, Amherst, Port Hawkesbury, and Sydney. Also, for the second year in a row, we are delighted to be raising not only the traditional rainbow flag but also the trans pride flag here in Halifax today. We will first raise the rainbow flag here in the courtyard of Province House, then walk down to the waterfront where we will raise both the trans pride and rainbow flags where they will stay throughout Pride season.

Thank you all for being with us and celebrating Pride and diversity across government.